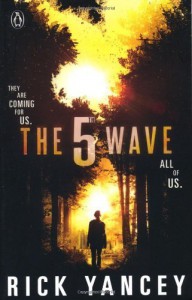 Rick Yancey has a lesson for the people of Earth, an invasion is coming and they are going to use any mean necessary to take Earth:

The first wave was darkness, they took away electricity; The second wave they used mother nature against humans; The third wave a plague where only a few survived; The fourth wave you cannot trust anyone but no one was prepared for the fifth. Cassie was one of the "lucky" ones most of her family was able to survive the waves but not everyone made it. Now with her brother and father they make their way through the world to a camp where everything is about to change.

I will admit that I watch the movie before I read this book, so I knew basically how things were going to play out and true to form there were things in the book that did not make it to the movie, but overall I think that the movie was a fairly good representation of the book. It was an interesting premise and I how smart the Aliens were in their approach to eliminating the human, really I cannot think of better ways in the end. Although, typical that the invading species underestimates the other.

I never felt really attached to any of the character like I think Yancey wants you to be. I will say that Cassie was the biggest disappointment for me. I did not mind Cassie in the beginning, I actually thought that she was going to be the strong female lead in this book, but I could not be more wrong. The further I read in the book I found she became a weaker character, she relied way too much on Evan and went against her gut feeling too many times. She does have some redeeming qualities in that she is loyal to a fault especially towards her brother and she does have times of bravery, but the whole middle portion of the book really just had her portrayed as a weaker character. Overall, she was not the strong female protagonist that I wanted her to be.

This leads me to the wish that there was a point of view from Ringer as she is who I wanted Cassie to be. She is tough, at time ruthless and smart enough to know there is more going on and she does not second guess her gut like Cassie does. She also has a compassionate side that is under played at times due to the situation but you can see that it is there.

Although I liked the Alien invasion aspect of the this book, I really could not get invested in any of the main characters in any way. So I do not think at this time that I would continue on with this series, although I might consider it if the next book had Ringer point of view.

Instead of This,
Check These Books Out: