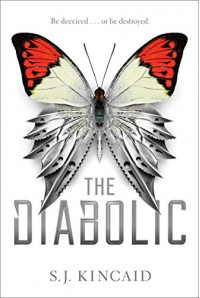 S.J. Kincaid takes readers to a world where technology is dying and those at the top seek to keep it that way so they can hold on to their power:

Diabolics are created to be ruthless, powerful, and have a killer instinct. They are devoted to a single person and will stop at nothing to protect them. For Nemesis that person is Sidonia who is an heir to the galactic Senate. They grew up together and Nemesis would do anything to keep her safe, even if it means taking her place in the imperial court as a hostage. Nemesis has to navigate the court with all its lies and deceptions, where one wrong move against the Emperor could lead to death. With the Empire beginning to fracture and rebellion on the way, Nemesis has to tread carefully in order to survive.

I really enjoyed this book, and I would have read it in one sitting if I would have been able to, but life gets in the way. I think my favourite part of this was the politics. Kincaid was not afraid to show the darker aspects of it either. The lies, murders, wheeling and dealing that goes on behind everyone's back are at full light here. I mean this in the nicest way but this book was like a space version of Pinocchio, except for the whole not being able to tell a lie aspect, plenty of lies to go around here. Diabolics are not real people, they are created for one purpose only and that is to protect those that they are bonded with and nothing else. However, Nemisis' "owner" sees her as more than that and wants more for her as well, in other words to be become a real girl.

I think the overall concept of the Diabloics was interesting. I mean why wouldn't the people in power want a personal body guard who is bonded to them and will protect them at all costs, no questions asked. Diabolics are not created to think, or have feelings they are created to serve, nothing more than an object and thing something that was owned. You can see that this is how Nemesis "feels" about herself at the beginning of the book and it was interesting to see how Nemesis adapted and grew throughout the book especially when Sidonia is not around to help guide her. Nemesis is a vicious character and will not (and does not) hesistate to kill anyone that threatens her or Sidonia. So you can guess things do get a bit bloody and this book does take some darker turns that I was not expecting.

I appreciated that Kincaid had the romance/relationship as secondary aspect in the book and that there was not a love triangle.There was no need for one in this story and I am really glad that Kincaid decided to not have one. Even the romance/relationship part is fairly stunted as Nemesis does not really understand quite the emotions involved as her love has been dedicated to Sidonia.

This book is a really good stand alone read, but i have just realized that it is going to be part of a series. Not sure where Kincaid is going to go from here, but I am interested in finding out. One to add to your reading list if you're looking for something a little different in the sci-fi YA genre.