Elise Kova: The Alchamists of Loom 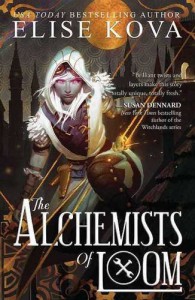 In the first in a new series, Elise Kova takes the reader to with world of the Loom, ruled from above by the Dragon King:

Ari lost everything; friends, her lover, her way of life, when the five guilds resistance fell to the Dragon King. Now she uses the skills she learned in the resistance, her ability as an engineer and magical talents to be the White Wrath enemy to every dragon and known for contributing to a thriving underground Dragon organ market. That is until she meets Cvareh, a Dragon who claims to be on the side of those in Loom and he is willing to bargain something very precious, a wish,  if Ari is able to get him to the alchemists so that the resistance can start again. Ari knows she cannot trust Cvareh, and that the task may be near impossible as assassin after assassin is sent after Cvareh by the Dragon King, but a wish from a Dragon can give Ari the one thing that she desires most and hopefully the freedom for Loom.

I do not read many fantasy genre novles, but I was drawn to this book first for by the cover, second by the description of the book and third I haven't read a fantasy book in quite some time so I was excited to try something different. Kova uses a tried and true premise to frame the world and story around; one society/culture/people oppressing and abusing the other and those that try to take the power back. This is done in a completely fantasy world that had some very interesting and disturbing elements (think Frankenstein/plastic surgery to the extreme) and the thirst for power that goes along with it. Loom is divided into 5 different Guilds (Raven, Rivet, Alchemist, Revolver and Harvesters) and where you are born is what specialty you will grow up perfecting, if you show any sign of weakness or do not live up to the Dragon's standards you are killed (this mainly happens to children). Loom supports The Dragon's world above with the introduction of machinery and some magic, it were these aspects that the Dragons became aware of Loom and wanting to possess and control it. With all the machinery and magic this novel does have a very steampunk feel to it, especially with Ari and her engineer abilities.

I really like Ari as a main character, she is strong, confident, smart, often thinks the worst about people, has a past that we don't know too much about but she has a caring side especially when it comes to Florence. Florence is an awesome sidekick to Ari, she just needs to gain confidence in herself. She is probably the character that grows the most in this book, as she is forced in to circumstances that she has never been in before and many of them are a true test for her character both physically and morally. Cvareh is a good counter point to Ari with his obsession with things that are pretty and complaining about his clothes getting dirty or having to wear clothes out of fashion. He truly shows the differences between Loom and Nova. It is also interesting to watch Cvareh grow as a character as he tries to survive not only the threats on his life from other Dragons and Ari but also trying to navigate a new world in Loom.

I find that Dragons does not seem to be an apt description of the characters just based on the cover art of the books in this series, but also how they are described in the book. To me they seem that they would be more of Elfin or Fae or some other magic creature that Kova could have created. Based upon descriptors and the fact that they do not have wings or the ability to fly or shape shift in to what I would call traditional Dragon form. You say Dragon to someone we will probably all come up with some sort of similar image, and what is presented in this book is not that image. Maybe the reason they are called dragon is explained in the next books in this series but I think that is a slightly misrepresentation of these individuals.

I also could have done without the romance aspect that is hinted at. I mean why does there have to be a romance element? Ari and Cvareh they dislike each other in every way, yet drawn to the other individual as well. Why cant they just not like each other but are forced to work together for a common goal, why does that have to lead to attraction????

I still have a lot of Why questions after reading this book, which is not a bad thing as I know this is a series, however, quite a few of those questions are world based, so there are a few things that are not so clearly set out. I found the characters in this book to be very interesting and why I kept turning the pages to see what they would do next. I look forward to reading the second book in the series and hoping some of my questions are answered.