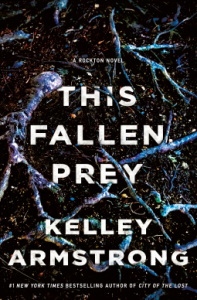 This is the third book in Kelley Armstrong's Rockton series (City of the Lost and Darkness Absolute) and it is one of my favourite series right now. If you like mystery, thrillers and small town secrets this series is for you.

It starts with hearing a plane overhead, normally this would not be a concern for most small towns, but Rockton is different, plane do not just find their way there. The town has only one plane and it is currently parked in the hanger. Casey and Dalton head for the hanger and see a plane lading on their runway.They get a shock when a new resident, Oliver Brady, for their town embarks, claiming that he innocent and has been sent here falsely. The council has sent them a dangerous criminal to keep imprisoned for at least 6 months. The longer Brady is imprisoned in Rockton the louder he states his innocence of the crimes he has supposedly committed. Rockton is not sent up to a prison and it is only a matter of time before some of the town folks believe him and then begins the biggest and deadliest man hunt in Rockton history..

If you finished Darkness Absolute, you were itching to get your hands on this book because of that cliffhanger ending, I was just happy I was late to the Rockton party and only had to wait for the book to come in the mail. This is one of my favourite thriller/mystery series out there and Armstrong is one of my favourite authors, so you can say that I have high hopes for all of her books. Overall I enjoyed this book. I liked that this book ventured a different path from the first two book in that is a man hunt book with sides of murder. This book does not stop from the very beginning and I really enjoyed the Cat and Mouse game that occurs both within Rockton and in the forest as well as mentally as people try to determine if Brady is innocent or not.

Once again having to rely on no technology in order to get things done. I like that they are training Storm to be a working dog especially a tracking dog. I also like that it seemed that Mathias is getting a larger role as I find him extremely fascinating in both his motives and all of the reasons that he was put in Rockton. He's such an interesting character and one you would never want to find yourself on the bad side of. I hope that we get to know even more about the other residence that live in Rockton especially with the new additions that occurred in this book. There are also some revelations about some of the people that Casey has relationships with in this book that I don't think most people will see coming.

Alright, I know that Casey and Duncan are making Storm into a working dog, but Storm was such a focal point throughout the story that other aspects suffered at times. I get that Storm is now an important part to Casey's life and job, and while Storm did find some key evidence some of the times that she ran away from Casey, it seemed to happen over and over again, that it became redundant. Maybe this was to showcase that dog never stops working, but there were quite a few times where she was more of a hindrance than an assets which makes me think that Casey should have just left her at home. I feel like in Casey's case most of the problems that she got into this book were caused by Storm. So I guess what I'm trying to say is I appreciate what Casey and Duncan are trying to do with Storm, I just don't want the dog training aspects to take away from the rest of the plot.

Another good addition to this series, I love the settings, characters and the overall lack of technology around. I look forward to seeing what Armstrong can come up with next for the town of Rockton.