The Stranger You Seek: A Novel 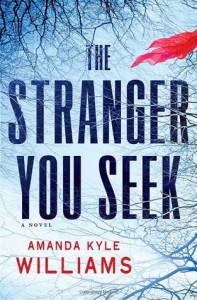 In her debut Amanda Kyle Williams takes the readers to Atlanta where it is part of a serial killers games to make sure that the whole city is on edge especially those who work within law enforcement.

Atlanta is not just suffering from a summer heat wave, a killer has emerged one where there appears to be no connection between the victims. The killer becomes more bold with each kill and taunting as the lead detective, Rauser, begins to receive letters from the killer with clues of who is next, but not enough information to stop it. This leads Rauser to contact his friend Keye Street, who was a profiler in the FBI before alcohol took away her job and her family. Keye does not know if she will be able to handle reentering the world of serial killer is this is what lead her to drink in the first place. But the choice is taken away from Keye when she becomes the target of the killer and it is made clear that Keye is not going to get away from this case unscathed.

I enjoyed how this book began with a chapter that is from the point of view of the serial killer. This chapter sets the stage for the entire novel and it makes you want to look over your shoulder thinking that someone is watching you.

Keye Street is an interesting character. She used to be a profiler for the FBI but was kicked out because she became an alcoholic, however, I think that this is a very real problem within any police or law enforcement agency. I appreciated that Williams never had Keye forget that she was an alcoholic and that Keye still craves what a drink could do for her. There are some parts in Keye's interaction with other characters is that a few state that Keye is basically of herself and that everything is all about Keye. I did not get this impression at all in any of the relationships that Keye had. If anything I think that the character who wanted every thing to be about him is Rauser. He is the one that is always needing Keye and her expertise, he is the one who becomes so involved in the case that it does eventually become about his career. There is also supposed to be sexual tension between Rauser and Keye, I did not feel it at all. I think that they work great together as a collaboration in a case, but as a couple, I do not see it.

I think that Williams is a new author to watch out for. I think her development of her serial killer character was really well done and I really enjoyed Keye as a character. I think that Williams needs to focus more on her interaction between characters so that they are better defined and more concrete, however, this book was able to keep me entertained. I look forward to reading another Keye Street novel.

NOTE: There are some descriptions of the murder scenes that may be disturbing to some individuals as many of them are sexual in nature.
476 BOOKS
FacebookGoogle PlusBlood Rose Books